Military coalition networks often suffer from sub-optimality caused by lack of a global view of the network state. Knowledge of the global network state (including topology and performance metrics) is the key to many network operations such as service placement and traffic engineering. Directly acquiring the network state of coalition partners in the control plane is subject to constraints by policies. A question of interest is: Can we develop a data plane-based technique to learn the state of coalition networks from measurements readily available at our own nodes?

We address the above challenge by developing topology inference algorithms that infer the structure and state of a target network from end-to-end measurements at a subset of nodes, using techniques from network topology tomography. While existing algorithms are limited to trees or union of trees denoting routing topologies, our algorithms can:

We use a novel two-step approach by first solving a possibly under-constrained linear system to infer the sum weight of links traversed by the same set of paths (called category weight), and then inferring a logical topology based on the category weights and the service chains. Our solution has guaranteed accuracy in several special cases and improved accuracy in the general case compared to state-of-the-art algorithms.

From the perspective of network management (e.g., network slice allocation), the proposed algorithms can provide a logical view of the coalition network state across coalition boundaries without requiring direct control plane access, thus facilitating easy deployment of services and migration of algorithms designed for single-domain networks. From the perspective of security and privacy, the proposed algorithms provide a view of what an adversary can infer from end-to-end measurements at a subset of compromised nodes, thus facilitating vulnerability analysis and design of defences (e.g., periodic updates of slice allocation as a moving target defence). 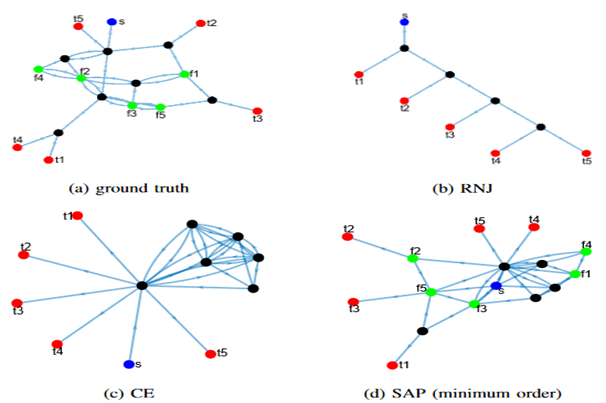