Military missions increasingly rely on communication and data analytic capabilities to efficiently conduct operations. Such capabilities should be available within the tactical unit formations even when the latter have little or no connectivity to the network infrastructure and the back-end cloud facilities of the Army. Therefore, the network and data analytic solutions must be robust to network failures and fragmentation events as well as easy to deploy and re-deploy every time the connectivity in the tactical network changes.

A new architecture called Software Defined Coalitions (SDC) has been developed, which extends the existing Software Defined Networking (SDN), to support military missions. With SDC, the network is managed by a designated network entity, the controller, which is programmable and thus automates many network operations. If combined with Machine Learning (ML) methods, the controller can reach an even higher level of network automation and realize with relative ease sophisticated data analytic services such as prediction of enemy’s presence in a region through processing camera video feeds and other similar situation awareness services. Yet, the robustness of this solution can still be a problem since mobility and failures in the network may fragment the nodes from the controller rendering impossible their access to the ML model and the delivery of the required service. To address this challenge, we argue that both the network architecture of SDC and the ML architecture used in this context need to be carefully designed to be robust to network failures and fragmentation events. 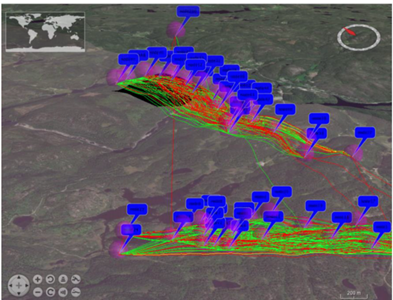 Bringing the concepts of SDC and ML from the strategic and network infrastructure levels all the way down to the tactical level, within the tactical unit formations, where network automation and intelligent data-driven decisions are needed the most.