Communicating information between coalition entities requires there to be a common understanding of the language and the concepts being exchanged. Where information has to be rapidly conveyed, or where the communications are limited, the use of specialized symbols is often used but this requires the various parties to know the precise meaning of the symbols and in coalitions the same symbol may have different meaning. Is it possible to communicate information in an unambiguous way? Can communication bandwidth be minimised by conveying information symbolically at different levels of abstraction so that meaning is preserved?

The core idea is to use semantic symbolic vectors as a unified way of exchanging information. We have developed a method of hierarchical vector binding where vectors at all levels of the hierarchy have the same structure but where vectors at higher levels in the hierarchy represent higher semantic abstractions of the underlying content of which they are composed. Information exchange is achieved by first transmitting a vector at the highest level of semantic representation. If the receiving party can interpret the vector, then no further exchange is required. If more information is required, then a request can be made for the vectors at lower semantic levels until a sufficient unambiguous understanding of the message has been achieved.

We have already demonstrated how information can be represented at different levels of semantic abstraction by encoding large documents (e.g., Shakespeare plays) where vectors at the highest level semantically represent the entire play whilst at the lower levels in the hierarchy the vectors can represent Acts or scenes down to the words spoken by individual actors. The same approach could be applied to a range of military requirements including intelligence reporting and command and control. 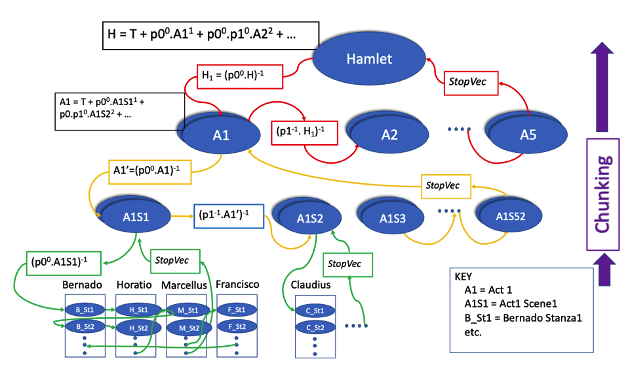